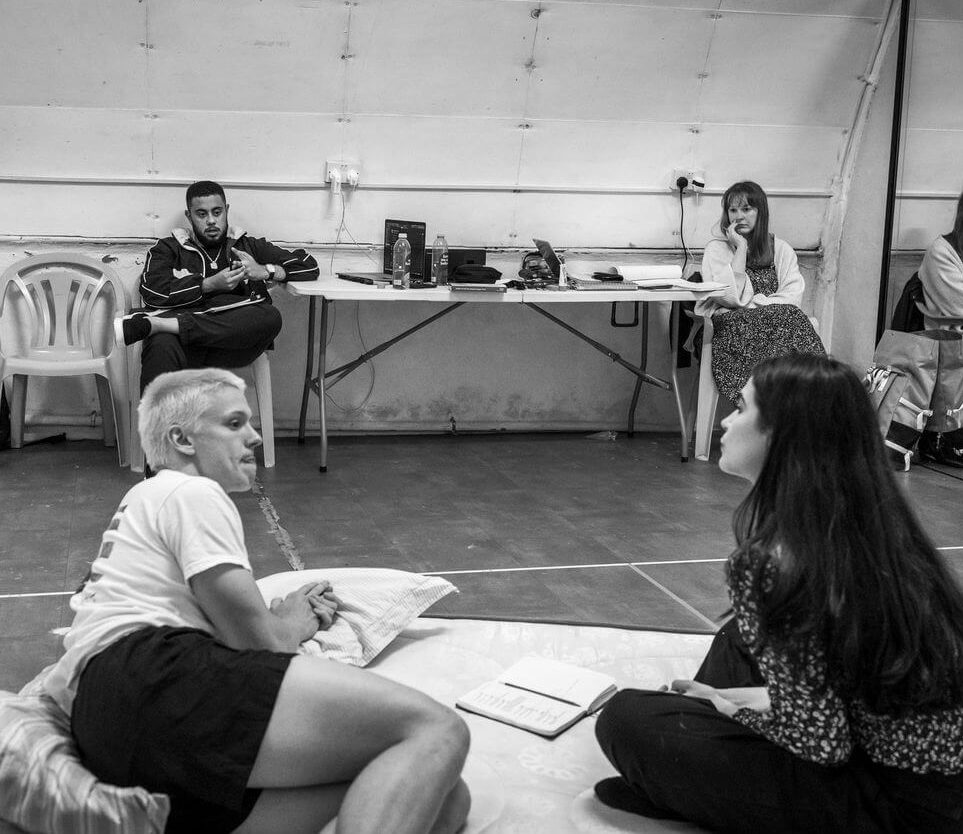 This Beautiful Future, written by Rita Kalnejais, is coming to Jermyn Street Theatre on 18 August. Jermyn’s Street’s production is the second realisation of the play, originally performed at the Yard in 2017. Directed by Chirolles Khalil, this new instalment of This Beautiful Future was produced by and stars Freddie Wise and Katie Eldred. With under a month to go until they start their four weeks run, Wise and Eldred sat down to discuss their upcoming production and the quasi-modern nature of Kalnejais’s play.

Set in 1944, it tells the story of a young couple’s intense love affair, but beyond the metaphorical walls of their romance and literal walls of a farmhouse, war rages.

“It raises all these questions about responsibility and innocence and what makes you innocent and guilty.” Said Kalnejais in an interview for the original performance at the Yard.

Otto is a Nazi Soldier, and Elodie is a teenage girl in occupied France. Throughout the play, they are enclosed in a farmhouse, raising a chick, having pillow fights and too engrossed in their young love to spare a thought for the dark reality of the world.

The lovers talk in modern vernacular (“My Dad said he would take me to Hitler’s gig and I was, like, whatever”) while pop songs play in the background. At the same time, two older, mysterious figures, Paul and Alwyn, watch on as Elodie and Otto career towards their fates.

In 2017, while in his last year of drama school at Drama Centre, University of Arts London, Wise came across This Beautiful Future when it was on stage at the Yard. In his final year of education, he had felt oppressed by the increasingly corporate nature of the profession.

“It becomes very industry heavy. You start to talk about yourself as a product which is a fairly grim concept,” reflected Wise.

This Beautiful Future gave him a new lease of life for acting.

“I found it really inspiring, and it brought me back to why I wanted to do this profession.”

He enjoyed the community and support that surrounded the Yard, and it showed him how much London fringe theatre could do.

Wise and Eldred discussed the play and the possibility of performing it.

“We spoke then about doing something with it in the future… it felt so suited to the two of us.” Said Eldred, who had tied her thick dark hair into a low bun.

Wise and Eldred met at Drama Centre but were a year apart, so they never had the opportunity to act together, except for auditions.

“Because we self-tape together so much and we love that experience… we always said we’d love to do something together,” Eldred explained.

However, that opportunity took its time to materialise.

Eldred graduated from Drama Centre in 2018, a year after Wise. She has been in multiple stage productions, most notably The Rubenstein’s Kiss at Southwark Playhouse. Wise appeared in the final season of Poldark and Maleficent 2. He had most recently finished filming Danny Boyle’s biopic on the Sex Pistols, which explained his split toned newly buzzed haircut.

However, in March 2020, Wise and Eldred were presented with an open stretch of free time.

“Cut to lockdown Freddie brought this play back up. We worked on it as self-tape scenes … and so wanted to make it a short film initially.” Eldred said.

Wise explained that the versatility of live theatre drew them away from their initial concept.

“When we went through the script, and we played around while filming ourselves, what jumped out to us was how different we could take the direction of the play.”

Wise referred to a scene where Otto tells Elodie that he shot her old teacher earlier that day.

“We were doing one scene that seemed very dramatic, and then we changed it up to play it much lighter with less consequence. That is what the play can allow you to do.”

The emergence of Covid-19 heightened their resolve to make it a live production. They felt that the 18-month suspension of live arts would mean people would be crying out for “a show that demanded you to be present”, said Wise.

Eldred explained how the consequences of the virus, such as a smaller, more closeted life, brought new meaning to the play.

“We also drew parallels with our current situation in lockdown to people who … were physically restricted to one place, which is what they (Otto and Elodie) are in their room.”

Eldred discussed how during the early days of lockdown, the world became more whimsical. “That time was very much based on your relationships with other people, and the outside world seemed to drop away, which is very much what they experience, in the first act particularly.”

Wise commented on the parallel between the innocent world of the pandemic, playing games and dressing up, and Elodie and Otto in the farmhouse.

Current events influenced This Beautiful Future from its conception. Kalnejais wrote the play with momentous developments, such as the election of Donald Trump and the vote for the UK to leave the European Union, in her consciousness.

As well as the shift in how modern events influenced the play’s meaning, Wise and Eldred’s adaption has changed the perception of their characters.

“In the original, Rita was saying you shouldn’t be judging Otto and Elodie. In a sense of what makes you guilty or innocent. They had fallen in love and weren’t aware of the geopolitical landscape of the time.” Wise asserted.

They have changed Otto’s age from 15 to 20. An idea that was partly due to Wise’s playing age and to make it harder for the audience to judge his innocence or guilt.

“I don’t think you can excuse his behaviour as much.” Said Wise.

Eldred remarked that “she is also more complicit. Because she hears what he’s doing and she doesn’t run, and they still spend the night together. For both of them, it becomes a darker undertone than the original, which was purely about being innocent in a dark world.”

Wise and Eldred explained how the music and set would assist in portraying those darker undertones and highlight the separation between the two productions.

In Kalnejais’s script, she had Little Mix’s ‘Shout out to my ex’ and Adele’s ‘Hello’, and she used footage of a young boy talking about Ed Sheeran as her inspiration for the language Otto used when talking about Hitler.

“I think a lot of the music she chose is very deliberately innocent… it is trying to get inside the head of a young person.” Said Wise.

Khalil, their director, has spearheaded the music and how it will take their production in a different direction.

“We have those pop songs, but if you intertwine it with the score and other sounds, it shows how the real world is seeping in more,” Wise said. “The veil of innocence is thinner in our world. By the end, the real world is crashing in.”

“It’s a very visceral play. There are feathers flying everywhere, and there’s water flying. The noise is going to be loud and alarming,” Eldred added.

The set, designed by Niall McKeever, will help accent the play’s noise and visceral nature and the darker undertones. It is a departure from the 1940s farmhouse of the original.

With all the meanings and messages Wise and Eldred hope to relay in their production of This Beautiful Future, still, their main concern is the audience feeling a sense of being present and all-consumed.

“With the year that’s happened, hopefully, people go ‘Oh my god, that’s why you go to the theatre’. That feeling of being present is something that you cannot get from sitting on your sofa…. Having something live and close and as intimate as it is, you can’t find that feeling anywhere else – other than live music.”

Just as the play finds hope in the possibility of a beautiful future, Wise and Eldred hope this play will help the audience see the same in their own.